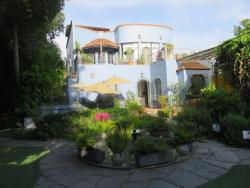 A UNESCO World Heritage City, San Miguel de Allende in the Mexican state of Guanajuato, is known as the “Heart of Mexico”, and a significant area for the start of the Mexican Revolution, initially September 16, 1810.

The town lies directly below the slope of Moctezuma and was originally founded as a mission in the 16th century called San Miguel de los Chichimecas.

From the moment you spot the jardin (the central garden of the town), you anticipate the French influence of wrought iron benches, street lamps and the graceful kiosk bandstand. Dictator Porfirio Diaz rules Mexico from 1876 to 1911, and the self-proclaimed Francofile greatly influenced the plaza, which is the heart of the town.

San Miguel showcases a delightful mix of architectural styles: Baroque, Classical, Neo-classical, Moorish and Gothic. Each new vantage point offers another monument, statue or mansion with cortinas galore. Even a trip to the panaderia (or bakery) is replete with color and stately balconies visually transporting you back in time to a different era. In fact, strolling through the cobble-stoned streets of San Miguel is a deja vu step-back-in-time, where the buildings seemingly echo different styles to each other.

Adding to this visual tapestry is an auditory symphony of nearly 87 bells clanging from churches and public buildings, making fiesta days an integral chiming musical accompaniment to the stirring and colorful architecture from bygone days.

A walking tour is a marvelous way to explore. Following are a few of my favorite stops:

GALERIA FRABRICA AURORA: In the early 1900’s this former factory off Calle Aurora was a major textile manufacturing center and a hub of commerce. Today the “Galeria” houses nearly 100 art galleries, restaurants and boutiques. The high-tech fusion style maintains aspects of the factory while showcasing ultra-modern murals, sculptures and paintings. The marriage of past and present is sublime and a magnet for the arts of the region.

THE CHURCH AND CONVENT OF SAN FRANCISCO: Here the façade offers a super example of Churrigueresque architecture (named for a Spanish architect). The columns, pillars, sculptures and freizes make it a “must see” on your walking tour.

THE ALLENDE HOUSE AND MUSEUM: The birthplace of the great hero and martyr of Mexican Independence, Ignacio Allende, is a colonial jewel. Aristocratic, proportioned and graceful, this late 18th century residence is a Neo-classical design with Baroque decorations. The cortinas (stone draperies carved in relief) were used to “complete” the aristocratic Baroque window look with stylized plumes, floral motifs, grapes and fronds.

THE CANAL PALACE: The former colonial palace now owned by Banamex is a glorious structure. The balconies are trimmed with ironwork and bronze. The eastern façade is in the Mexican “severe” style popular two centuries ago. It is a variation on Neo-classical architecture often seen in red and black. Just above the arches are carved eagles and birds, while the wooden doors are masterfully carved and flanked by stacks of columns, pediments and coats of arms.

TEATRO ANGELA PERALTA: On the corner of Calle Mesones and Hernandez Marcias lies on one of San Miguel’s architectural jewels. The Teatro is named after the “Mexican Nightingale”, hailed as the reigning queen of opera following her debut in 1862.

Angela Peralta sang, played the harp and piano and composed music. After an extensive restoration, the Teatro has taken its place among sizzling facades in Mexico. It is no particular style, but showcases ionic columns and simple lines with an elegant result.

LA PARROQUIA: Dominating the stunning horizon and the jardin is St. Michael the Archangel, known locally as La Parroquia, or simply The Parish Church. While it is not a cathedral, it is probably the single most photographed church in Mexico. The Gothic style with towers and pinnacles commands authority. The mason and builder, Ceferino Gutierrez, chose harmony in the selection of stones of pink and tan which change colors and textures with the shifting light. Much like an impressionist painting, La Parroquia casts its subtle and elegant beauty throughout the area.

Many other styles accompany the church. Under the arches as you enter, you will view the Mudejar style, a Moorish manner of design that flourished in Spain and Portugal. Baptistries and sculptures abound!

The architecture provides massive creative inspiration and memory insurance for years to come.

Jody Reed is formerly a writer at the White House and TV Consumer Reporter. A 17-year veteran travel writer, she is published regionally and nationally and is a member of the International Food, Wine and Travel Writers Association.